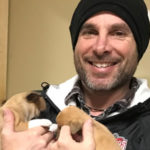 In addition to my personal experience, I’ve worked with animals in a variety of different capacities. After graduating high school from Central Bucks West I left Doylestown for Happy Valley, where I earned my BS in secondary education from Penn State. However before my career in teaching actually began, I moved to South Carolina. I got a job as a veterinary technician at an emergency vet care facility in Columbia.

During one overnight shift a pregnant boxer was dropped off. Tragically she’d been shot in the shoulder. Her brindle coat was crusted in blood. She was too weak to even cry, but I wasn’t.

In order to try and save her pups the doctor decided to do an immediate C-section. Eight tiny creatures, each in an individual amniotic sac were handed to me. I repeatedly sliced through the jellyfish like sac, suctioned out their snot, and massaged their tiny hearts with my giant fingertips. In my hands all but one began to breathe. My tears now turned joyous.

Seven pups survived, but their mama sadly passed away. I cleaned off her carcass as best as I could and with the puppy that didn’t make it, placed her carefully into our freezer. We never named her.

Every shift I worked snatched each of the pups from the incubator and followed the protocol, helping to nurse them towards a good life. My heart opened wider than their eyes, and thankfully it’s remained open to all creatures of the natural world. Feeding them formula from a warm bottle I was learning how to be a dad, practicing with puppies.

I volunteered to help a local animal rescue find foster families for all of the boxers. Of course I wanted to adopt one or maybe seven of the pups, but we already had two dogs in a little garden apartment. The maintenance man turned us in to the landlord, and we were fearing homelessness. It would have been worth it though.

My professional work with animals would be temporarily discontinued due to a PA teaching opportunity, but I never forgot what it was like to be there for those precious pups. I don’t know who shot the mama, but I’m sure it wasn’t accidental. I try my best to forgive, it is my chosen way.

One of the doctors took the Mama’s carcass, along with the pup whose heart wouldn’t start and buried her by the sea. That’s where rivers take the remains of this world; sifting through all of our memories and cleansing the residue of regret.

My decision to retire from teaching coincided with my desire to work once again with animals. It is a privilege to serve all of the pups that appear in our path, and to dog it up in Doylestown is extra special.

Thank you for reading one of my favorite brindle memories.